This is a set including 1 miniature of Cthulhu (painted) and 5 cultists (unpainted) and the Innsmouth micro game with a small board (the board is composed of 2 giant cards), 3 custom dice, tokens, rulebook and a cotton bag to carry your game. The miniatures can be used as part of the game. It’s a quick game for 5-10 minutes and 2 players.
Cultists minis come unpainted (only the Cthulhu mini is hand-painted).

This is a set including miniatures of Cthulhu (painted) and cultists (unpainted) and the Innsmouth micro game with a small board (the board is composed of 2 giant cards), custom dice, tokens, rulebook and a cotton bag to carry your game. The miniatures are part of the game. It’s a quick game for 5 minutes and 2 players.

A well known game in Innsmouth’s taverns and homes was “The Cult”. This is an agile dice game where players must complete the cult by placing the leader cultist in the temple to invoke the great Cthulhu.

The cult usually lasted 5-10 minutes, as it used to be played before approaching the coast at dusk. We played with 3 dice of symbols: the moon to represent the night, the talon that represented the favor of the Deep Ones, the Eye that allowed us to see beyond our dimension and the Blood of sacrifices. 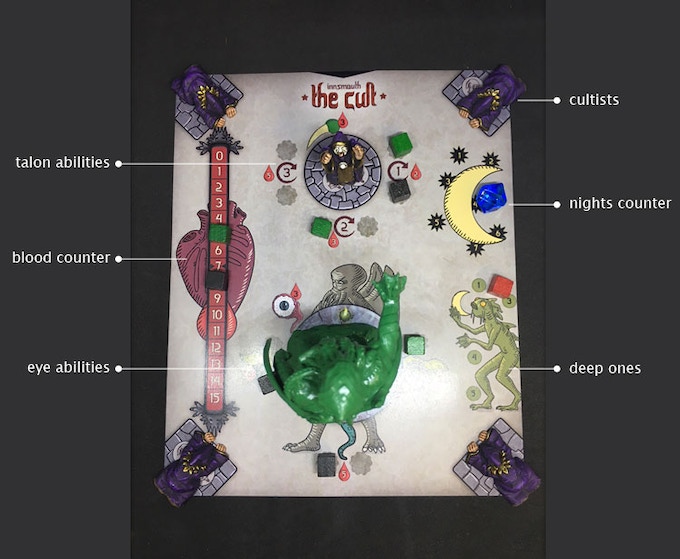 We will roll 3 dice in each turn, and we’ll try to gain a series of abilities that will make it easier for us to place our cultists on the board. The first player to place the cultist leader will be the winner of the game.

The cult is very easy to carry anywhere as the board is traditionally formed with two giant cards (3.5″ x 5.75″ each), and all the components fit into a comfortable carrying bag, practical to play on the shores of Cape Ann as you watch the arrival of the Deep Ones.

The game is available in a basic edition but also in the collector’s edition of the village, which includes figures of the cultists and the great Cthulhu.

These minis can also be used in different games such as pawns, scoreboards etc. as Innsmouth citizens usually did, as well as to collect and keep the cult alive between generations.